It has been a busy summer at Oregon Vine2Wine. The Willamette Valley set a record for number of days above 90 so the harvest has already started! I was fortunate enough to make time to attend a recent blind tasting featuring Pinot Noir from Oregon and California. Each bottle was in a brown bag and there were 3 mystery wines to throw people off as well. I wanted to share the results and my impressions.

The wines ranged in age from 2007-2013 so we had a wide range of vintages. The three mystery wines threw us for a loop as well. During a typical Oregon vs. California tasting it is normal to find California wines showing more ripe fruit – raspberry and stewed strawberry – while Oregon wines show more herbal notes, cherries and spices. Oregon wines also show a lighter color because of cooler temperatures during the growing season, sometimes a giveaway when blind tasting. I had four the five California wines pegged after the first round (Walter Hansen being the lone excetption because it showed earthy notes on the nose). Determining the producer of the Oregon wines proved more difficult since the 2007 Penner Ash showed very little signs of aging. I usually count on color to give me some hints in guessing where wines come from.

This was an educational tasting where wines varied in ages and price. I think if all wines were served at cellar temperature results would have been different. It is amazing how much temperature influences the aroma and flavor components of the wine. Alcohol is emphasized in warmer conditions and tannin is emphasized in cooler conditions. It is very important if you are holding a tasting that temperature is taken into consideration.

Tasting Pinot Noir is something that is unique. These wines show an elegance and complexity that I haven’t experienced in other varietals. They can be fruity, earthy, show minerality, and showcase aromas that can’t be put into words. Each terroir is unique to region and each region is unique within a specific site. I have yet to find a grape that excites my palate like Pinot Noir. It is also a grape that is not widely appreciated in the United States. It has higher acidity and it is thinner skinned so the varietal has a lighter body than bigger/bolder reds. However, once you taste a truly great Pinot Noir, you will find that there is no other grape you would rather drink. 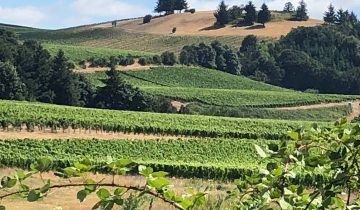 We are now open for tours Thursday-Sunday. Please call ahead to inquire about availability.